Obamacare: like solving hunger by mandating everyone eat three meals a day

The simplistic dichotomy peddled by the mainstream media is that if you oppose Republicans/The Tea Party, you support Obamacare. If you oppose Democrats/Pres. Obama, you oppose Obamacare. Everything’s neat, simple and tidy. Anything that varies from that easy narrative is pretty much ignored. Frankly, MSM journalists should have read some of the discussions my friends and I participated in today. A progressive hating on the ACA, a libertarian praising it... the nuance would make their heads explode.

So here I am a progressive who is disappointed that the ACA is still the law of the land.

Obamacare is akin to solving the problem of hunger by mandating everyone eat three meals a day.

In its decision, the Supreme Court has ruled that health insurance (ACA has nothing to do with health care) is the only private commodity that all Americans are required by law to purchase as a condition of citizenship, as a condition of being.

The health insurance industry is surely sending a huge thank you to the corporate Supreme Court, for this greatly expanded and government-mandated (under penalty of fines) pool of buyers for their racket.

This is a huge step backwards for real health care reform. Liberals, who know in their brains that Medicare for All (single payer) is the real solution to the problem of access to affordable health care, will be neutered for at least the next 20 years. They think Obamacare is just fine. People who think the situation is just fine don’t agitate for something better, especially when it’s completely different.

The ACA also pre-empts further efforts real reform because it gives the private health insurance industry even more of an incentive to preserve the status quo at any cost.

Posted by Brian at Thursday, June 28, 2012 No comments: Links to this post

The evolution of language, even in a relatively short period of time, is interesting. I'm presently reading the late Edward Said's Culture and Imperialism. The prologue, written in mid-1992, makes several references to "Lebanonization," referring to the fracturing of societies. If written today, he surely would've used "Balkanization."
Posted by Brian at Wednesday, June 20, 2012 No comments: Links to this post

Email ThisBlogThis!Share to TwitterShare to FacebookShare to Pinterest
Labels: languages

Organic food turns people into jerks, and other deceitful headlines

Recently, a news story made the rounds about a study that concluded that organic food turns people into jerks. NBC News' Today show was one of many mainstream media that ran virtually identical headlines on this topic.

This instance of media bias may have been merely sloppy headline writing or some overworked copy editor in search of a good headline, but the effect was to mislead readers. It's a perfect example of how merely consuming the news media, even generally respected sites, can make you LESS informed, not more, if you do so uncritically.

The headline implies that eating organic food turns people into jerks, according to the study. But when you actually read the articles and use those critical thinking skills, you find out that the subjects don't actually EAT any organic food. They are merely SHOWN PICTURES of organic food.

So an intellectually honest headline would read, "Does *seeing pictures* of organic food turn you into a jerk?"

What's worse is that none of these news outlets bothered to raise questions about the credibility of research on the effects of organic food where none of the subjects actually ate organic food as part of the study. How such a flimsy study got such wide and uncritical media play perhaps creates a greater suspicion of media bias.
Posted by Brian at Friday, June 08, 2012 No comments: Links to this post

How to really thank a GI

Rather than (or if you prefer, in addition to) merely intoning some cutesy catchphrase, Farenell Photography blog has some good suggestions on how you can show appreciation to a member of the military in a substantive way.
Posted by Brian at Wednesday, June 06, 2012 No comments: Links to this post

Email ThisBlogThis!Share to TwitterShare to FacebookShare to Pinterest
Labels: military

This morning, North Country Public Radio just did a news brief, about 30-ish seconds, about (what else) a pol -- this time,l showing that hardly any New Yorkers knew anything about the primary challengers to NY Democratic US Sen. Kirsten Gillibrand. I have heard similar polls relating to Massachussetts' Democratic US senate candidate Elizabeth Warren's primary challengers. Is it possible that this is because the mainstream media refuses to do any actual reporting on said primary challengers?
Posted by Brian at Monday, June 04, 2012 No comments: Links to this post

Graphic opinions of the day: funding your own persecution, how news really works and bigots and their money are soon parted

I've often said that gays and women are essentially forced to fund their own persecution. 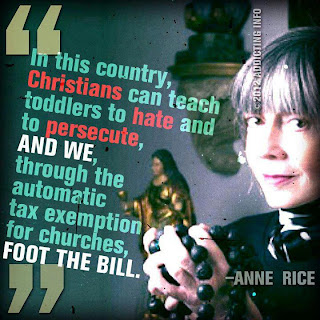 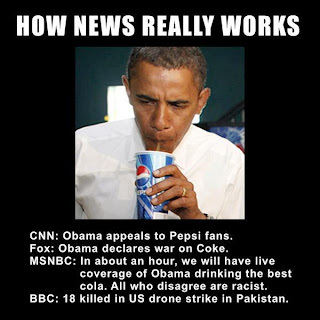 Disclaimer: none of these are created by me. Credit is given when known.
Posted by Brian at Friday, June 01, 2012 No comments: Links to this post